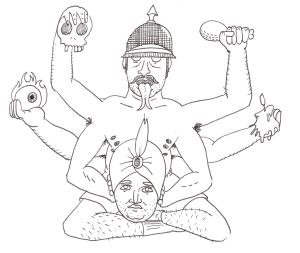 And here we are, list #100. We seriously can’t think of a better band to ring it in with than one of our favorite bands of the year/decade/ever.

The King Khan & BBQ Show are a gift from the psychedelic rock ‘n’ roll heavens. King Khan is our Little Richard and Screamin’ Jay Hawkins. Mark Sultan (BBQ) is our Del Shannon and Reg Presley. They’re both punk as shit and can still croon and clap like The Crystals.

And their new album Invisible Girl? Incredible. There’s the finger snapping “all in good fun-turned-massacre” song “Spin The Bottle,” there’s the hilarious and barn stompin’ “Animal Party,” and of course, there’s “Tastebuds,” a catchy song about having the ability to taste by using…ahem…sexual organs. It’s one of our favorite albums of the year. Easily.

Tonight, (Dec. 2), The King Khan & BBQ Show will be at the Logan Square Auditorium. If you haven’t bought Invisible Girl yet, get out there and do so. Happy 100, everybody. Here’s a list from King Khan & BBQ.

1) Queen & David Bowie – “Under Pressure” (single) – “We started opening our shows with this song recently … it is truly an amazing song … behind the moustache is gold and rabbit teeth.”

4) Nobunny – “Chuck Berry Holiday” (from Love Visions) – “Our fuzzy brother from Oakland strikes again … you can hear the pee pee in his pants … and I don’t mean Chuck!”

This entry was posted in Artists. Bookmark the permalink.